By Armenian American MuseumJuly 13, 2021No Comments

Glendale, CA (July 13, 2021) – The Armenian American Museum held a festive celebration to mark its historic Groundbreaking Ceremony at the future site of the museum in Glendale Central Park on July 11, 2021. More than 1,000 guests joined to commemorate the start of construction on the landmark cultural and education center that will serve generations to come.

The program began with warm welcoming remarks by renowned KTLA5 News Reporter Ellina Abovian who served as the esteemed Host of the Groundbreaking Ceremony. 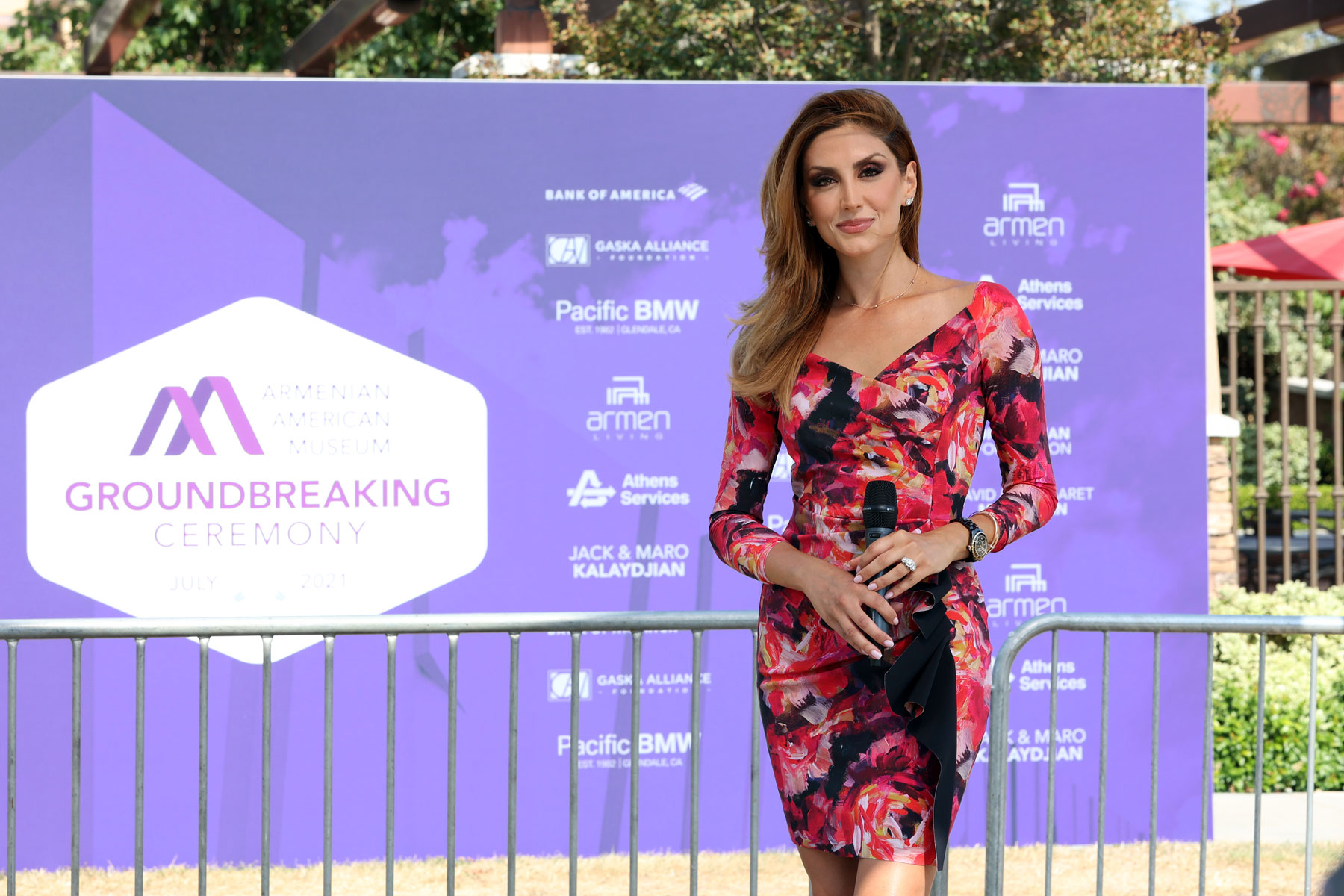 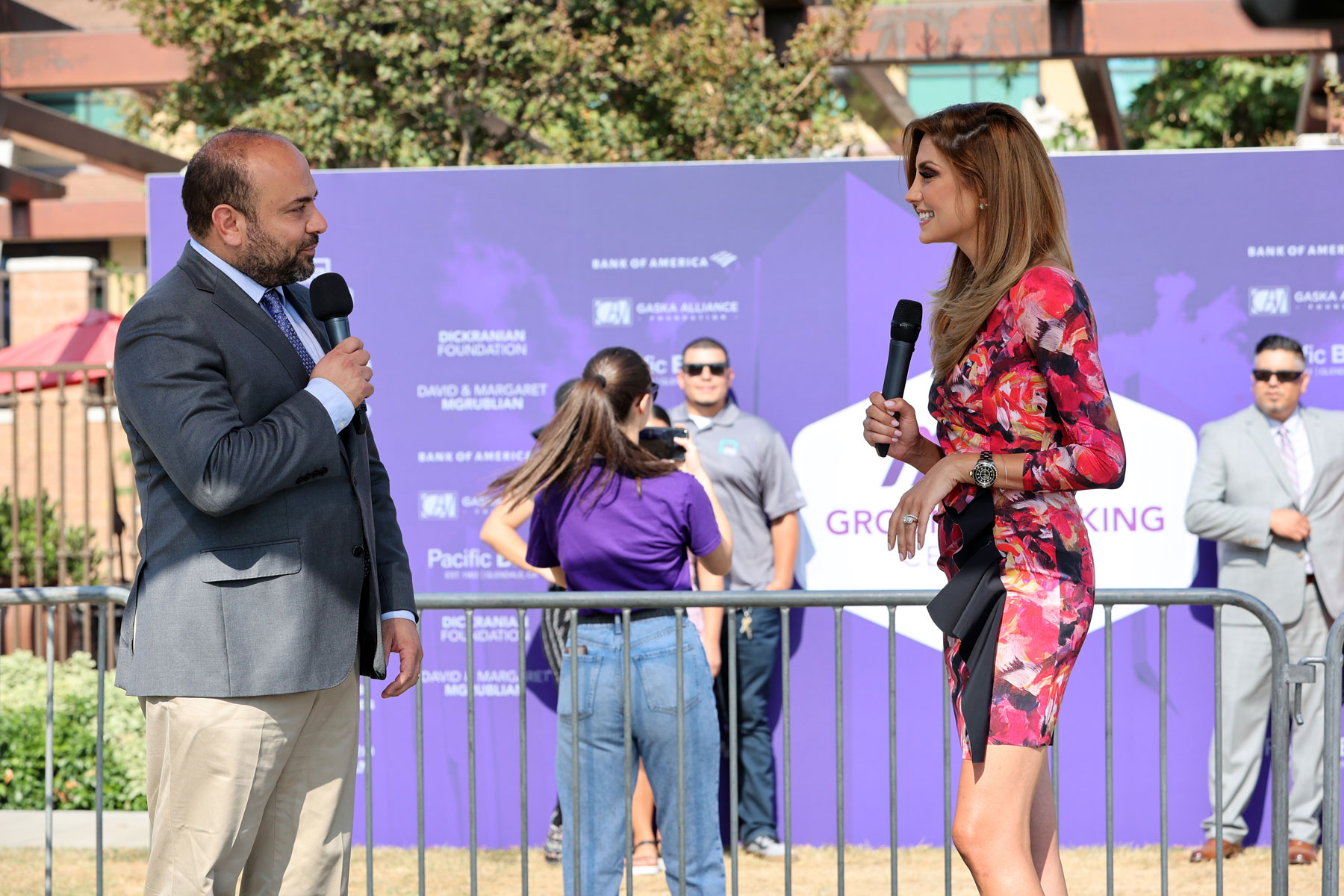 Executive Director Shant Sahakian officially welcomed the in-person attendees and the worldwide audience watching the broadcast of the Groundbreaking Ceremony on behalf of the Board of Trustees, Board of Governors, and leadership of the museum. 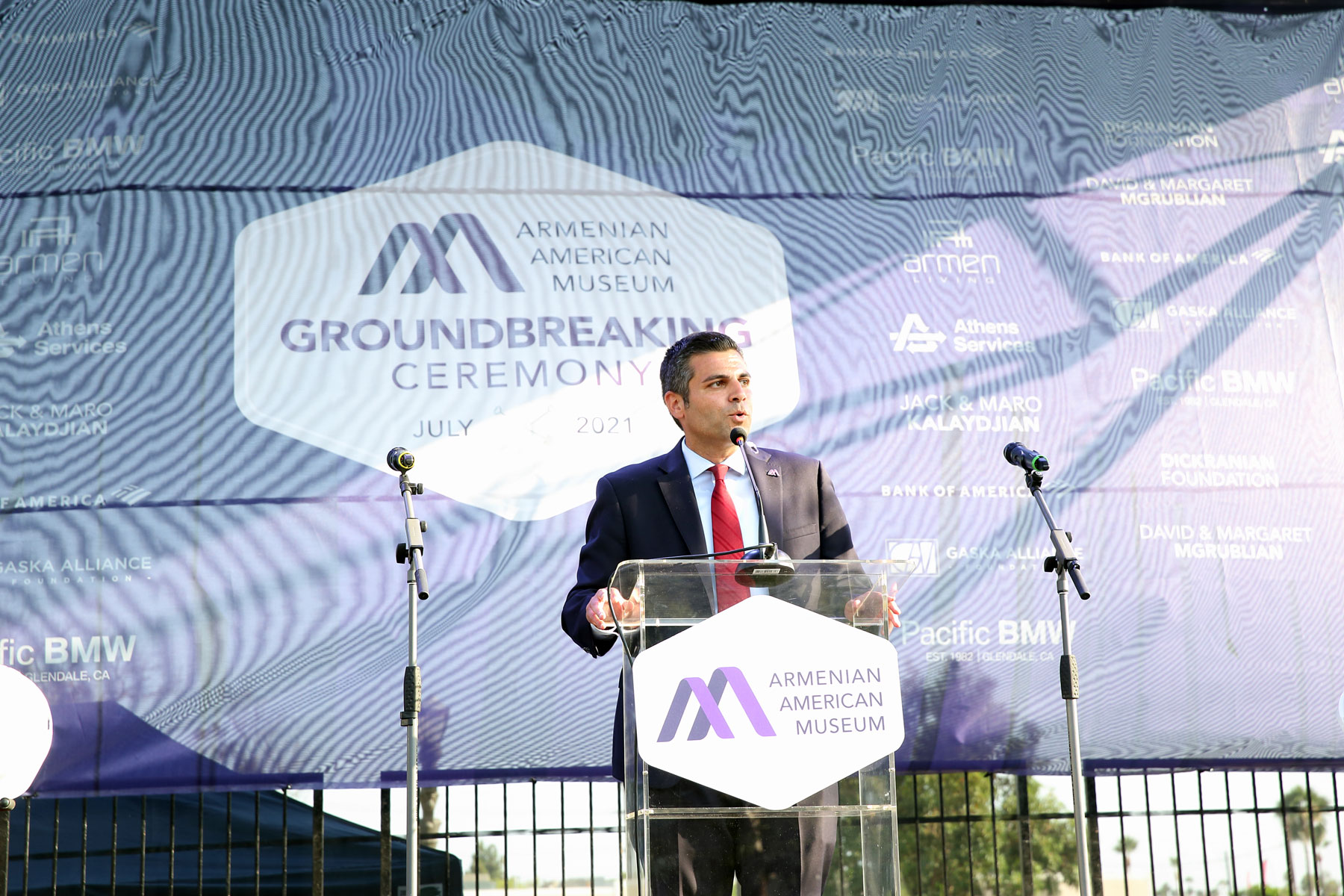 Alexandra and Lilia Yaralian of AGBU Los Angeles Choir delivered an exquisite performance of the national anthems from the main stage. 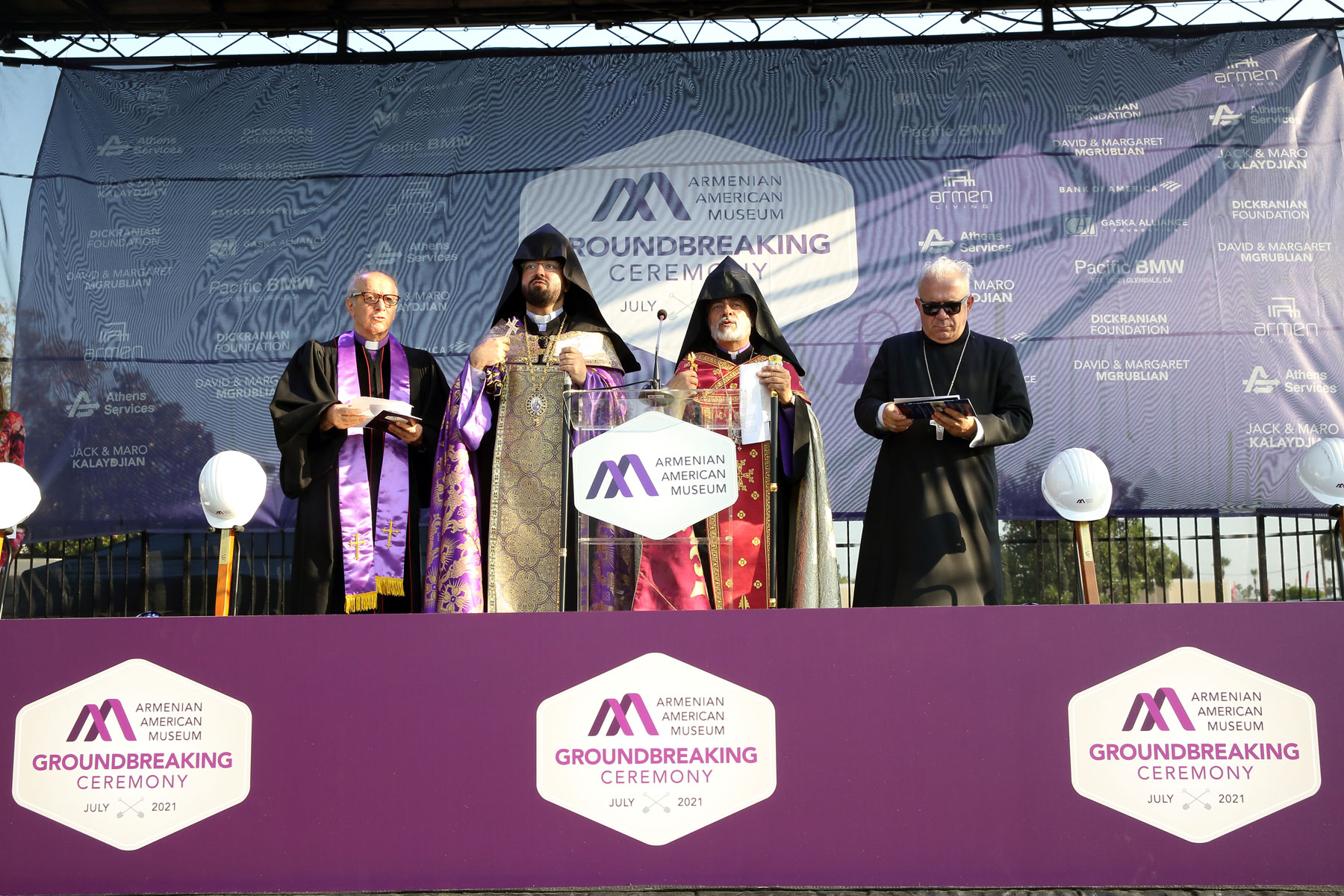 Glendale Mayor Paula Devine and City Councilmembers Ara Najarian, Vrej Agajanian, Ardy Kassakhian, and Daniel Brotman delivered remarks on behalf of the City of Glendale which has dedicated a premier location for the landmark center in the heart of the city and has served as a valued partner for the cultural and educational center. 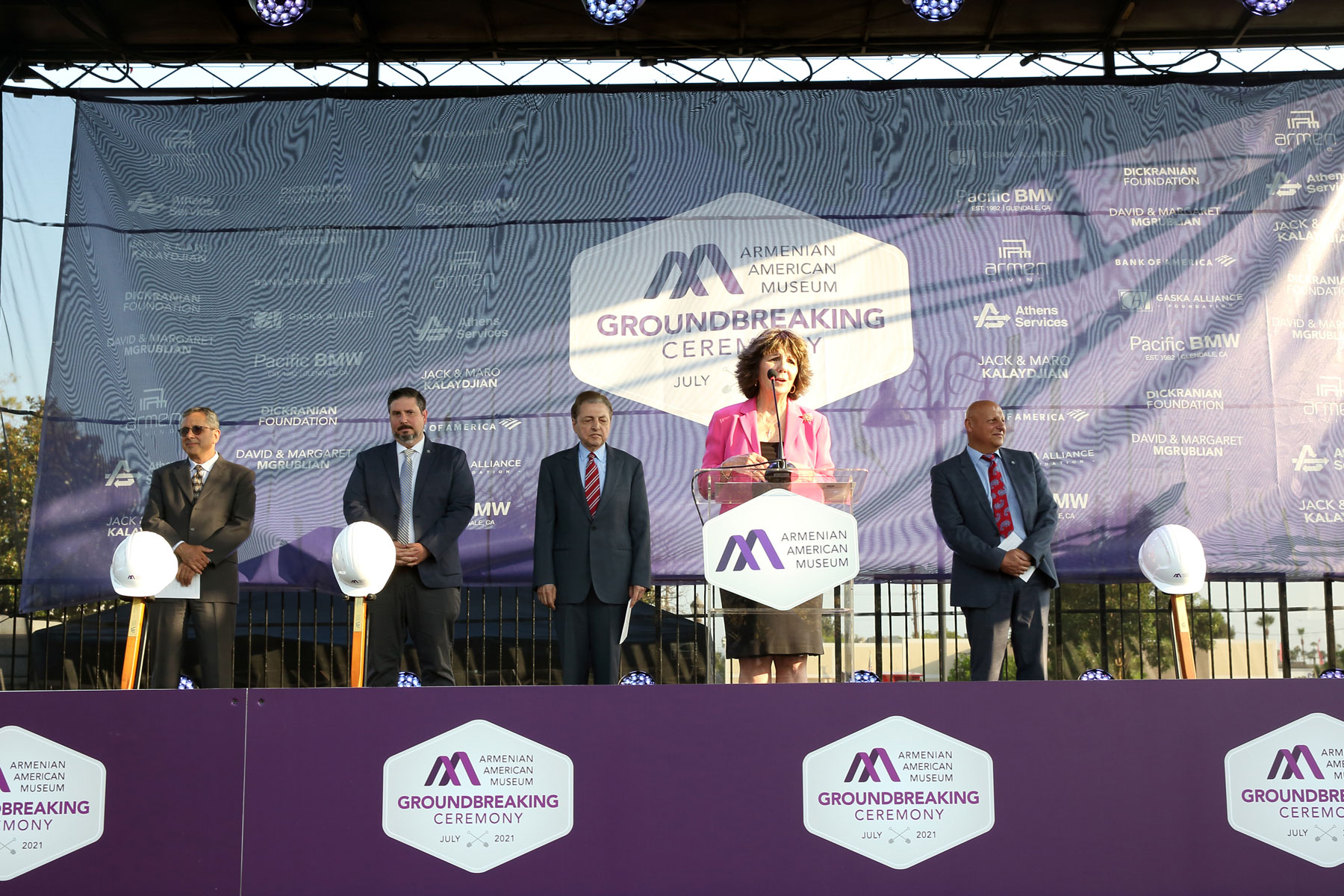 “Today’s groundbreaking is a testimony of the work of our unified community,” stated Groundbreaking Chair Talin Yacoubian who represents AGBU Western District as the Co-Treasurer of the Board of Trustees. “The museum will bridge our past and shape our future – what an incredible privilege that is. I am proud to say that our hope is well on its way to becoming a reality. Soon, we will all be gathered here again to cut the ribbon and open the doors for the Armenian American Museum!” 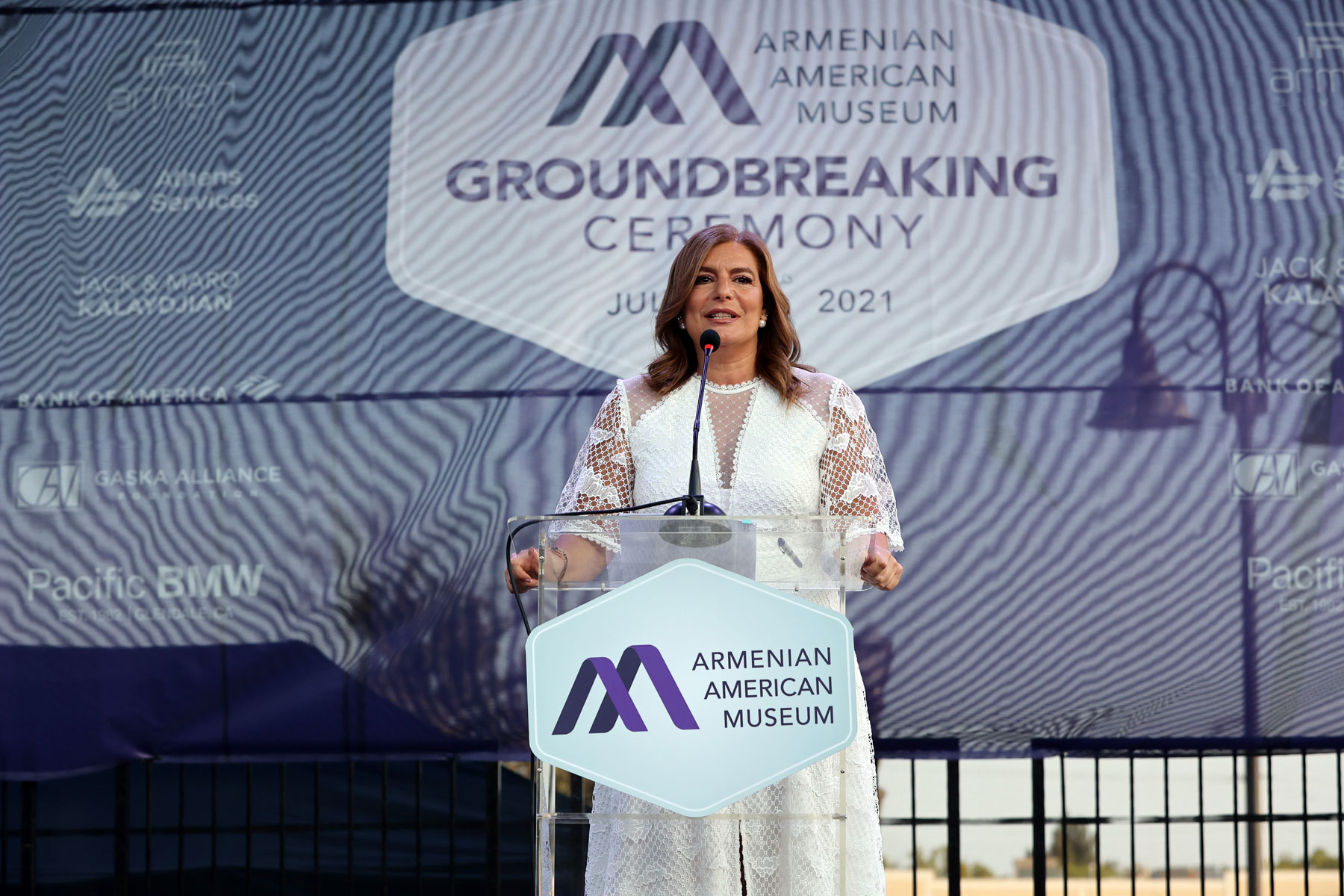 California Senator Anthony J. Portantino, who has been a champion for the museum and has helped secure millions in state funds in support of the project, delivered inspiring words on the promise of the institution to impact generations of children through school field trips and generations of families by connecting them to their roots. His remarks were followed by special video messages with warm congratulations by Senate President pro Tempore Toni G. Atkins and Governor Gavin Newsom. 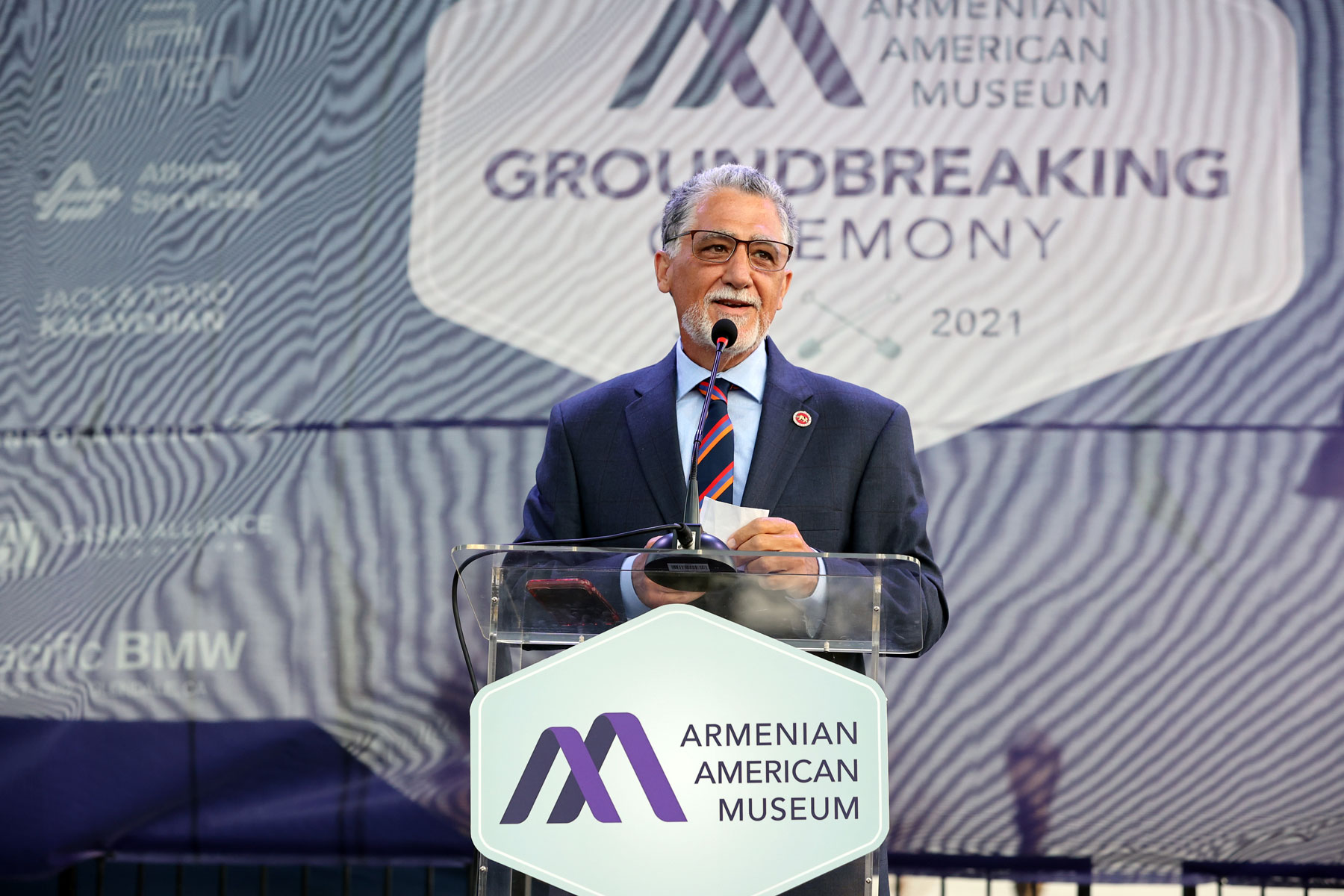 Congressman Adam Schiff celebrated the Armenian American community as an important part of the national fabric of the country and discussed how the museum will bring people together to embrace cultural diversity. He announced his efforts to advocate for federal funding in support of the project to rounding cheers throughout the audience. 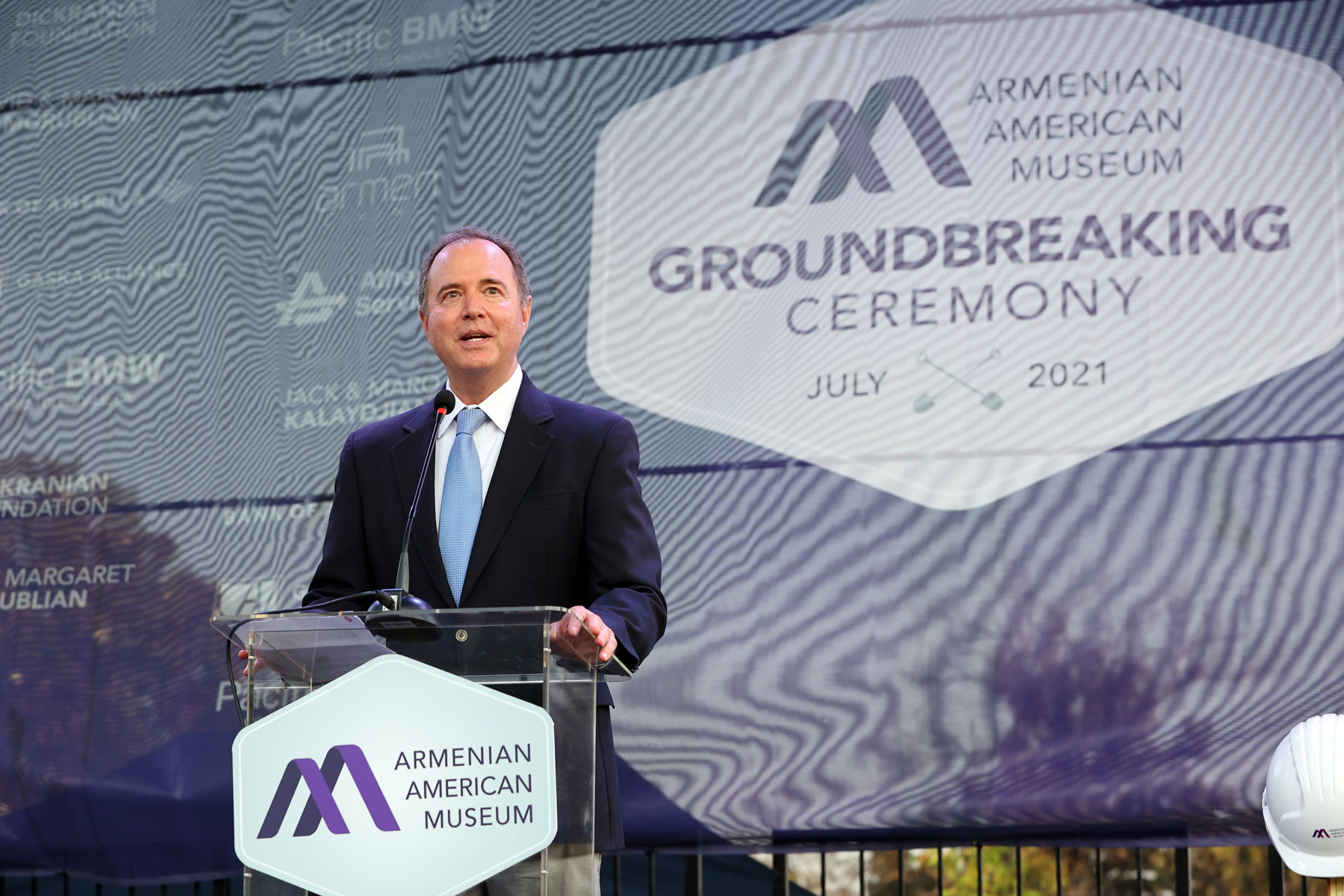 Executive Chairman Berdj Karapetian thanked the museum’s generous supporters for making this momentous occasion possible and invited Kevin and Alexia Kevonian to the stage to deliver a special message on behalf of their family. 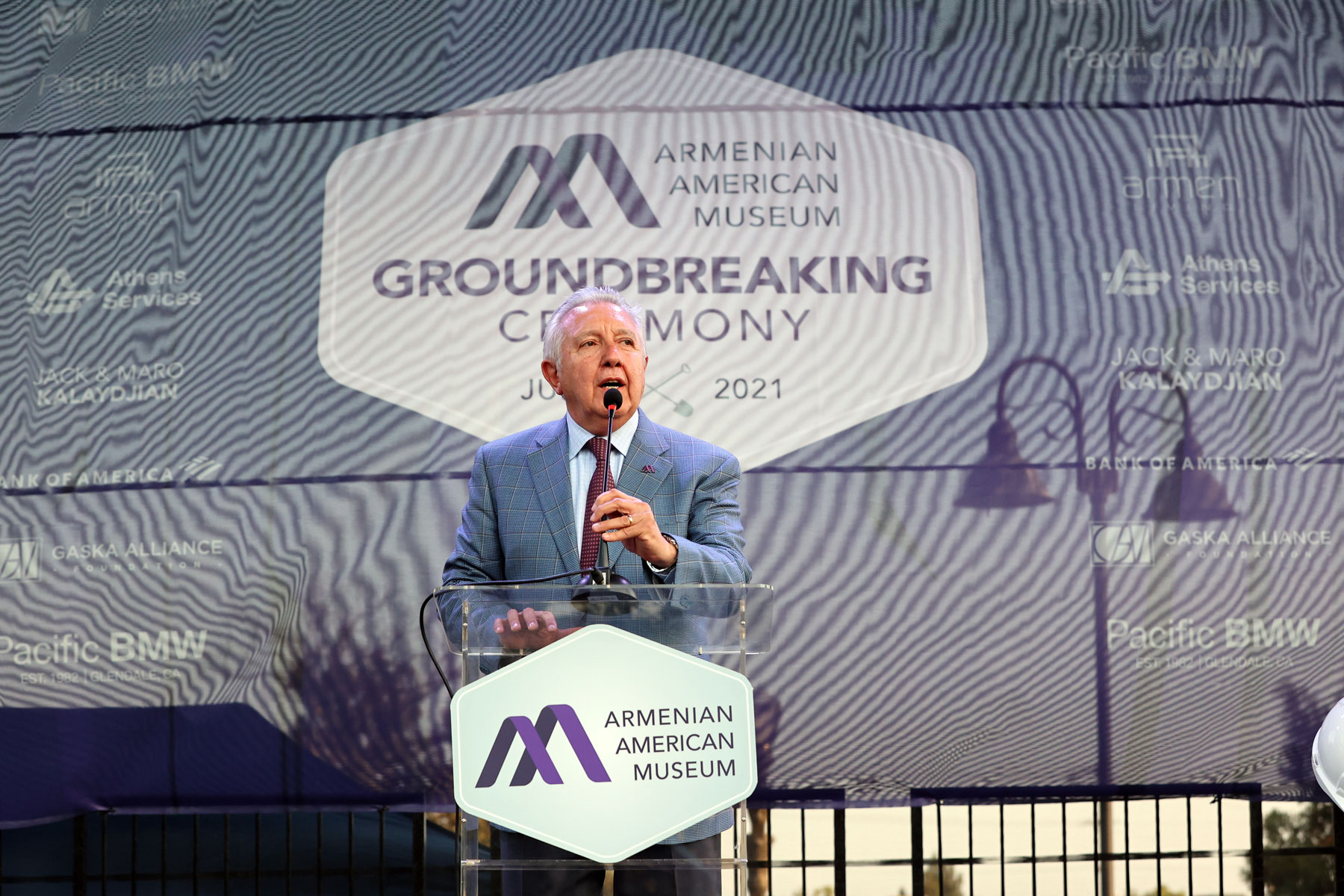 “This building, which will be erected very soon, will reflect what we are made of,” expressed Alexia Kevonian during her powerful and emotional remarks from the stage. “The need for cultural preservation is imperative now more than ever. That need can be met right here, on this very soil beneath your feet. Join us and when you do, the world will see what our collective efforts can achieve – a standing legacy.” 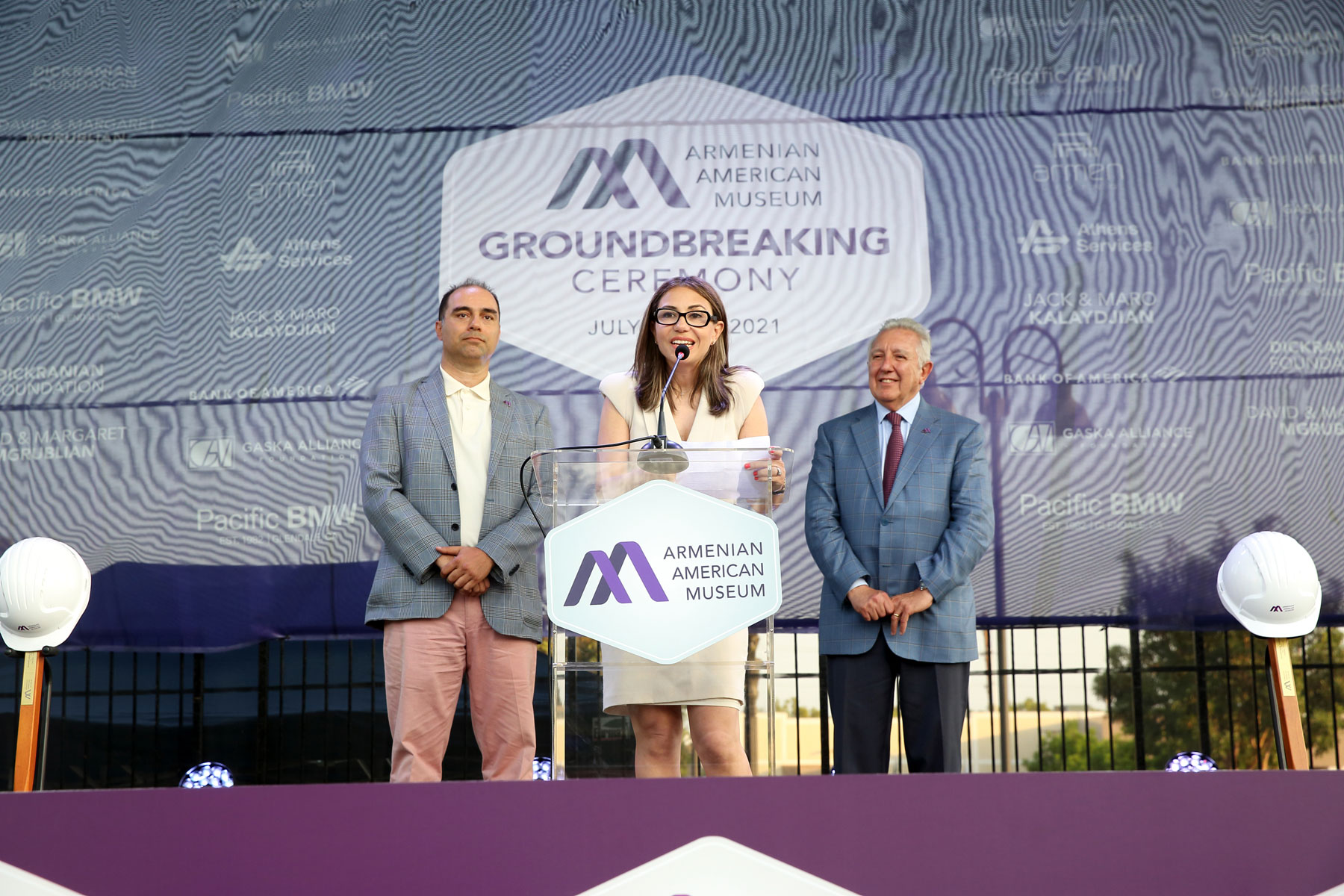 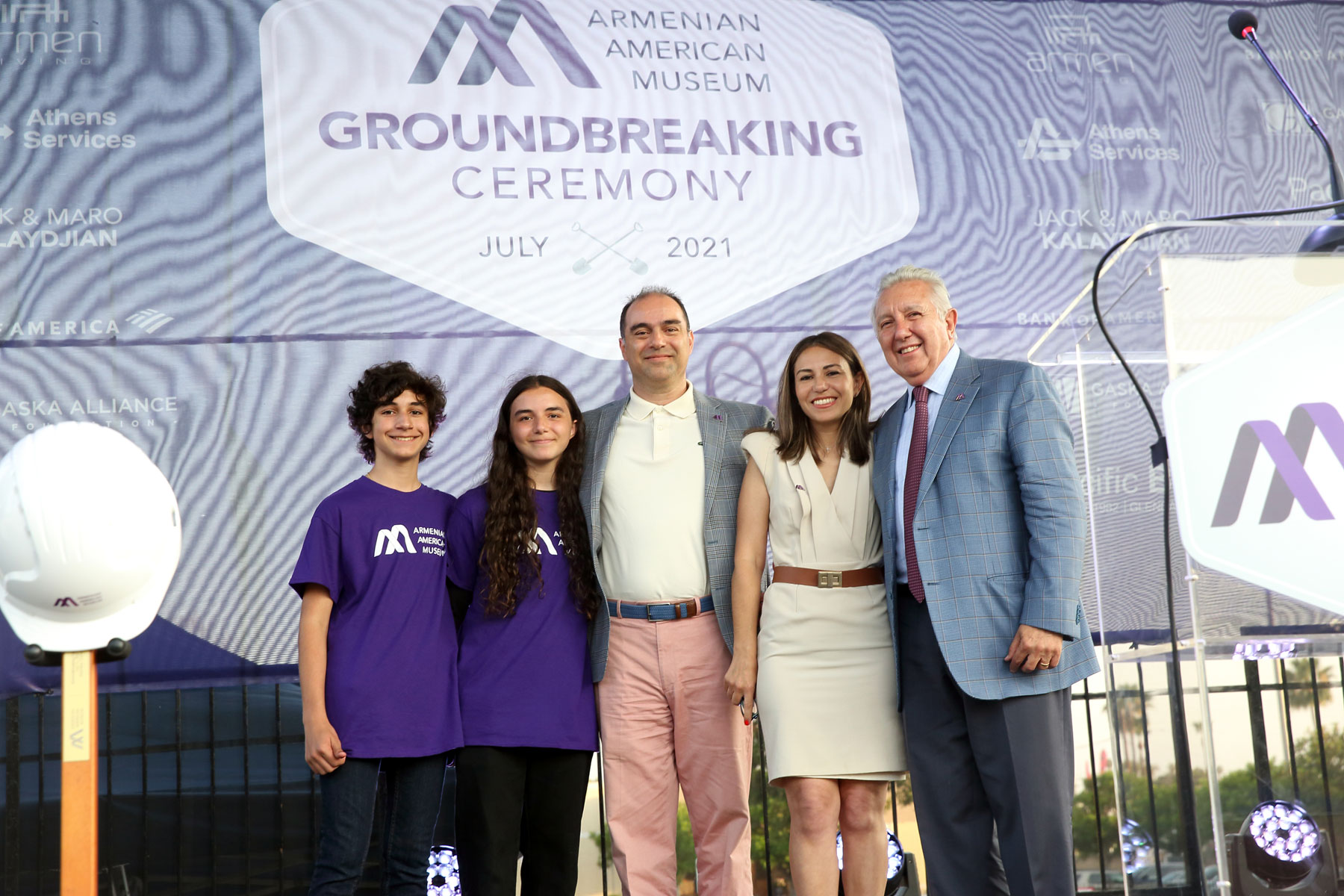 The event concluded with the Board of Trustees and Board of Governors joining together on stage for the shovel ceremony to mark the historic groundbreaking. Museum leaders with ceremonial hard hats and shovels in hand officially broke ground and rejoiced at the community’s collective achievement. 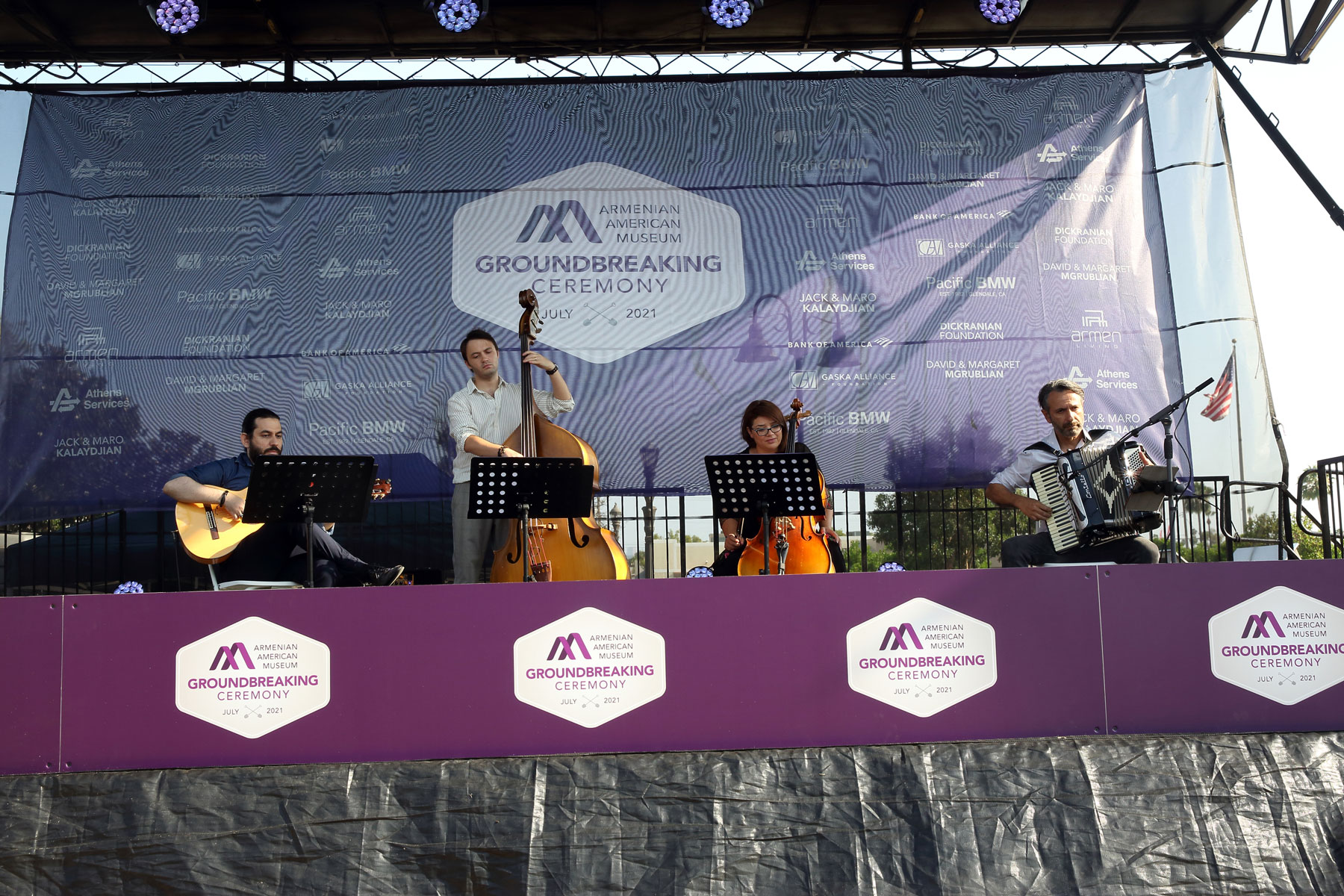 Learn more about the Armenian American Museum at https://www.ArmenianAmericanMuseum.org.