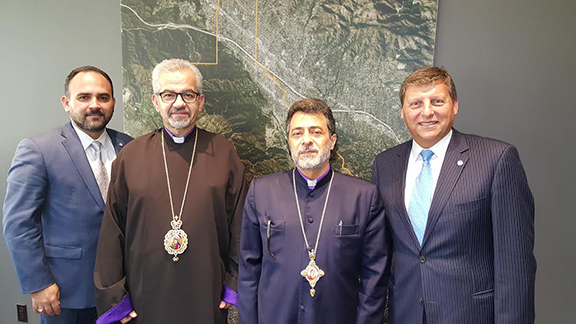 The Armenian American Museum announced today that they have initiated discussions with the City of Glendale on the terms for a Ground Lease Agreement of the 1.7 acre property adjacent to the Glendale Civic Auditorium and across from the Glendale Community College on the corner of Verdugo Road and Mountain Street.

“We had a very constructive meeting today with Mayor Ara Najarian and City Manager Scott Ochoa regarding the concept design for the museum and timing for consideration of the Ground Lease Agreement by the City,” remarked His Eminence Archbishop Hovnan Derderian, the Primate of the Western Diocese of the Armenian Church of North America and Co-Chair of the Armenian American Museum’s governing board.

“We are grateful to Mayor Ara Najarian and the other members of the City Council for their encouragement and guidance on developing a museum that will empower individuals to embrace cultural diversity and speak out against prejudice,” added His Eminence Archbishop Moushegh Mardirossian, the Prelate of the Western Prelacy of the Armenian Apostolic Church, who co-chairs the governing board of the museum.

The Armenian American Museum Project Development Committee also announced that more than 500 hundred people visited their website within the first two days of its launch on Friday, November 6.

“We are seeing a strong interest for a museum that will promote understanding and appreciation of America’s ethnic and cultural diversity by sharing the Armenian American experience,” stated the Museum Project Development Committee Chairman Berdj Karapetian.

The Armenian American Museum will launch its presence on social media outlets this week and start scheduling presentations to community organizations starting next week.